An International JD/MBA? The 2018 Conference Goes Beyond Borders

By: Michelle Ling and Max Steiner

This year’s theme was Beyond Borders: Implications of International Business and Law.

In light of the ongoing NAFTA negotiations, this conference spoke to concerns surrounding the digitization of information and cybersecurity, coupled with the nature of globalization. As in previous years, it addressed various relevant topics at the intersection of business, law and public policy. This year, however, it did so on an international scale.

The Conference Co-Chairs, JD/MBA students Michelle Ling and Christina Canagasabey, kick-started the event by emphasizing the significance of international business and law in modern society. They made a strong case for the relevance of the U.S. political sphere and potentially changing legal landscapes to future generations of Canadian lawyers and businesspeople alike. Lorne Sossin, Dean of Osgoode Hall Law School, then provided some insightful opening remarks. He highlighted three key topics: NAFTA, Brexit, and the global implications of the political actions from the U.S.

Throughout the day, distinguished panellists and moderators spoke on concurrent panels, focused on the following topics: 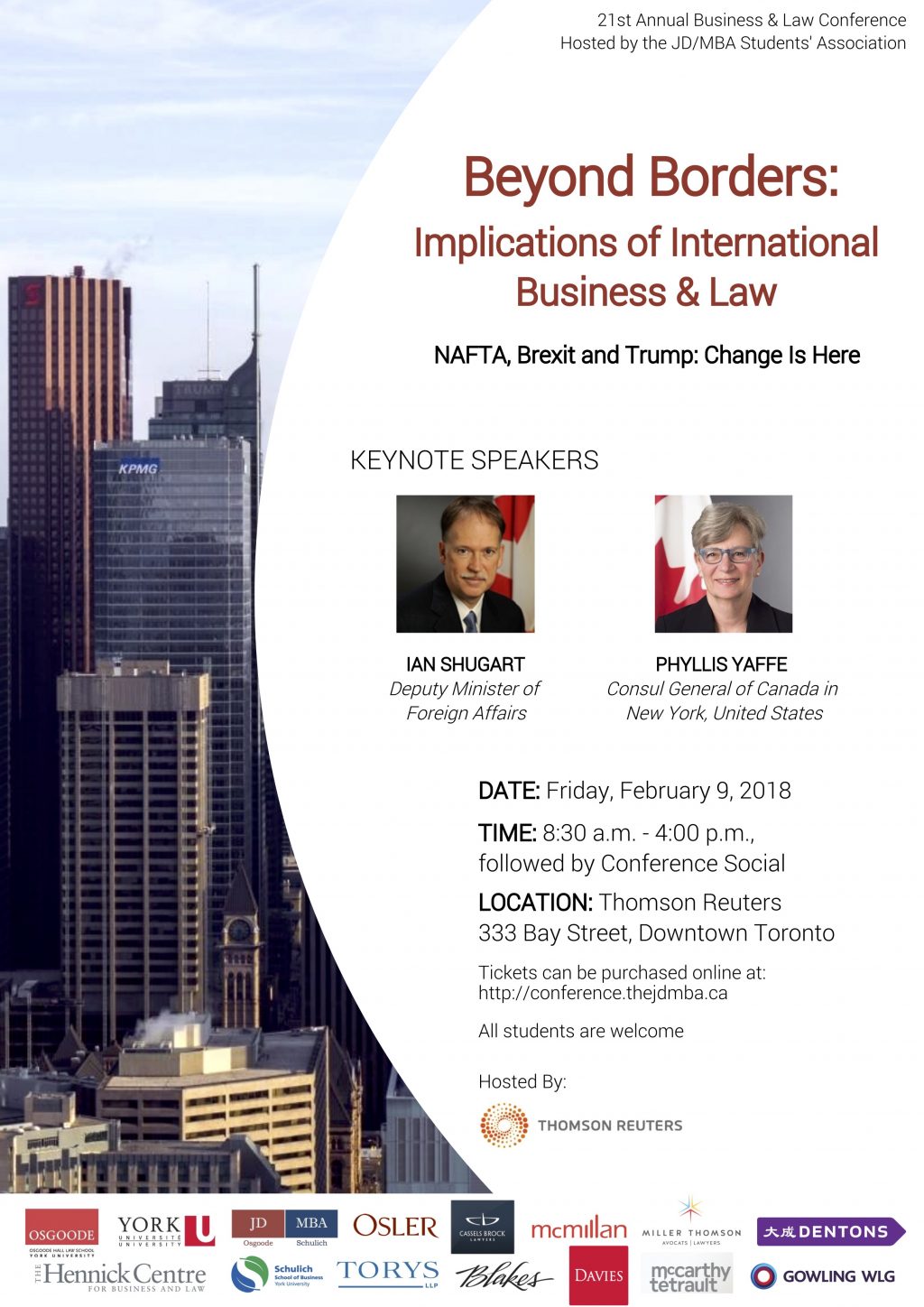 This year’s Keynote Speaker was the Deputy Minister of Foreign Affairs, Ian Shugart.

Mr. Shugart gave a thrilling speech about all four Conference topics. Of special interest were his comments on protecting our borders from shifts in fair and predictable trade. There is some dispute as to the precise definition of the former. This applies doubly as digital sovereignty becomes increasingly mainstream. In addition to Mr. Shugart, the Conference was delighted to feature Consul General of Canada to New York, United States, Phyllis Yaffe, who had a fireside chat with Edward Waitzer, Co-Director of the JD/MBA Program.

This year, the JD/MBA Conference Organizers introduced a new feature to the Conference; a Case Study.

Everyone had an exciting time working through the Loblaws case study focusing on issues relating to the CRA and the allegations of tax evasion. Assistant Professor at the Schulich School of Business, and fellow JD/MBA alumna, Sherena Hussain, took the helm in guiding this engaging discussion. Furthermore, Jeremy Goldlist, a recent JD/MBA alum and current articling student at Blake, Cassels & Graydon LLP, received the honourable 2017 Hennick Medal for Academic Excellence, awarded annually to the top graduating student of the JD/MBA program with the highest cumulative GPA.

As the Conference came to a close, Managing Director of Thomson Reuters, Neil Sternthal, provided insightful remarks as to the significance of this year’s Conference theme. Following this, Dezso Horvath, Dean of the Schulich School of Business, provided some closing remarks. He spoke to the various insights he acquired through his breadth of experience on a global scale, including his delight of being at the forefront of a leading global business school.