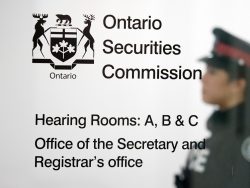 The Ontario Court of Appeal sided with the Ontario Securities Commission last week — overturning a lower court decision — on how OSC tribunals determine whether someone is in “in a special relationship” with a company at the heart of an insider tipping or trading case.

“It is significant,” Anita Anand, a law professor at the University of Toronto, said of the court decision, which was the first time the higher court had considered and ruled on a “crucial” element of insider trading provisions.

The Court of Appeal found the OSC had used the proper approach to conclude TD investment advisor Francis Cheng “ought to have known” the information on which he was tipped and recommended trades came from someone knowledgeable and in a special relationship with the company — even though the material, non-public information flowed through a chain of five people.

Determining whether the information comes from someone knowledgeable, or in a “special relationship,” with a company is a key to insider tipping and trading cases in Canada, which turn on the misuse of material non-public information. Those in a special relationship can include directors or officers, or a professionals dealing with the company, such as a lawyer or accountant.