TORONTO May 15, 2018 – The winner of the 2017/18 Donner Prize was announced tonight by Ken Whyte, Chair of the Donner Canadian Foundation, in Toronto. The awards gala at The Carlu was hosted by broadcaster Amanda Lang. 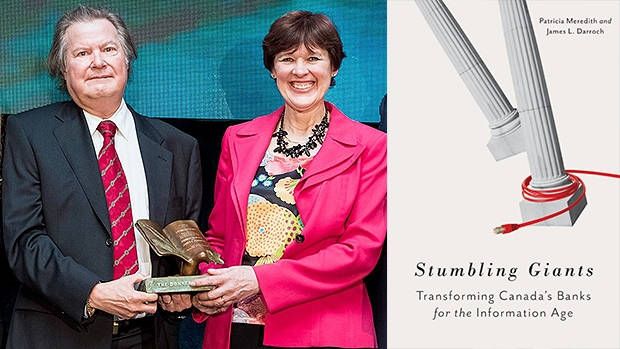 Meredith and Darroch outline how Canada’s big six banks survived the 2008 financial crisis by hewing to traditional and tested banking practices, making them a safe harbour at that time. However, as the modern global information economy continues to develop, the banks must confront their innovation crisis, or they will become increasingly irrelevant. In Stumbling Giants, Meredith and Darroch present a new vision for the Canadian banking industry that is a call to action for all interested stakeholders to work together in moving the banking system into the 21st century.

In its deliberation, the Jury noted: “In this timely and original book, Meredith and Darroch argue that Canadian banks are ignoring the dramatic and disruptive effects of info-tech changes that are threatening their very existence. The book is a policy manifesto, developing a compelling case for the need for fundamental change from the branch-focused business model of current Canadian banking, to a model that conforms to the habits of the mobile-app era. The authors offer a cohesive set of recommendations to put Canadian banks on track to deal with the challenges and opportunities offered by the fintech age. This book will be of interest to the general reader given this sector’s significance, but it is essential reading for every financial sector manager, board member, and policy maker in Canada.”

The other nominated titles, each of which received $7,500, were:

The winner of the Donner Prize was chosen from an impressive list of 78 submissions by a five-member jury: David A. Dodge (Jury Chair), Eva Busza, Jean-Marie Dufour, Jennifer Jeffs and Peter Nicholson. The Jury Chair commented on this year’s shortlist: “These books are shining exemplars of the Donner Prize – relevant and important topics of Canadian public policy, based on sound and original research and analysis, and accessible to a general audience. They cover the waterfront of issues specific to Canada and faced by most parts of the Western world.”

The Donner Prize, established in 1998, annually rewards excellence and innovation in Canadian public policy thinking, writing and research. In bestowing this award, the Donner Canadian Foundation seeks to broaden policy debates, increase general awareness of the importance of policy decision making and make an original and meaningful contribution to policy discourse.

Patricia Meredith and James L. Darroch, and the shortlisted authors, are available for comment and interview.

BOOK SYNOPSIS: Canada’s big six banks weathered the 2008 financial crisis very well. Their adherence to tried and tested twentieth-century products and services made them a safe harbour in the financial storm. However, as the modern global information economy continues to develop, the banks must confront their innovation crisis, or they will fail. In Stumbling Giants, Pat Meredith and James Darroch embark on an audacious and startling examination of Canada’s big banks. With banks earning forty percent return on equity from traditional retail banking, pressure from investors with short term interests has discouraged technological innovation and adaptation. Meredith and Darroch reveal the socio-technological disruptors threatening the banks’ three primary product divisions – lending, wealth management, and payments – and offer innovative yet realistic recommendations for improvement. Meredith and Darroch’s new vision for the Canadian banking industry involves a broad cross-section of Canadians – policy makers, regulators, customers, suppliers, investors, and bankers – and is a call to action for all interested stakeholders to work together in creating a banking system for the twenty-first century.