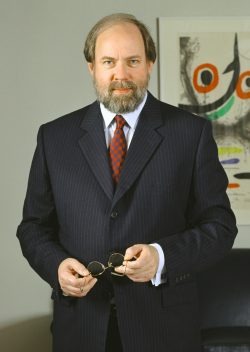 October 2017, the Davies Business Law Lecture entitled “The Supreme Court and Business Law” was presented by Frank H. Easterbrook, Judge of the United States Court of Appeals for the Seventh Circuit and a Senior Lecturer at the Law School of the University of Chicago.

From 2006 through 2013 he was the court’s Chief Judge and a member of the Judicial Conference of the United States. Before joining the court in 1985, he was the Lee and Brena Freeman Professor of Law at the University of Chicago, where he taught and wrote in antitrust, securities, corporate law, jurisprudence, and criminal procedure. He has published The Economic Structure of Corporate Law (with Daniel R. Fischel) and about 100 scholarly articles. He served as Co-Editor of the Journal of Law and Economics from 1982 to 1991 and as a member of the Judicial Conference’s Standing Committee on Rules of Practice and Procedure from 1991 to 1997. Before joining the faculty of the Law School in 1979, Judge Easterbrook was Deputy Solicitor General of the United States. He holds degrees from Swarthmore College (B.A. with high honors, 1970) and the University of Chicago (J.D. cum laude, 1973), and is a member of the American Academy of Arts and Sciences, the American Law Institute, the Mont Pelerin Society, Phi Beta Kappa, and the Order of the Coif. In January 2016,  the Davies Business Law Lecture entitled “Shareholder Wealth Maximization – On Steroids: Do the Brakes Still Work in Corporate Governance?” was presented by Professor John C. Coffee Jr., the Adolf A. Berle Professor of Law at Columbia University Law School and Director of its Center on Corporate Governance. He is the Fellow at the American Academy of Arts and Sciences and has been repeatedly listed by the National Law Journal as among its “100 Most Influential Lawyers in America.”

According to a recent survey of law review citations, Professor Coffee is the most cited law professor in law reviews over the last 10 years in the combined corporate, commercial and business law field.  In 2015, Lawdragon listed him on its 100-member “Hall of Fame” list of influential lawyers in the United States. In January 2014, the Davies Business Law Lecture was presented by American businessman, journalist & author, James McGregor. James is the current chairman of APCO Worldwide, Greater China, the former Wall Street Journal Bureau Chief (Taiwan and China) and CEO of the Dow Jones and Company (China), a member of the Atlantic Council, Council on Foreign Relations, National Committee on US-China Relations, and International Council of the Asia Society. As a professional speaker/commentator who specializes in China’s business, politics and society, he regularly appears in the media to discuss China-related topics. The lecture focused on his most recent book: No Ancient Wisdom, No Followers: The Challenges of Chinese Authoritarian Capitalism. In March 2013, the Davies Business Law Lecture was presented by Professor John Kay, one of Britain’s leading economists. Professor Kay is a Visiting Professor at the London School of Economics. He is also a Fellow of St. John’s College, Oxford University; a Fellow of the Royal Society of Edinburgh; and a Fellow of the British Academy. In July 2011, Professor Kay was tasked by the UK government to lead a review of equity markets and long term decision making. In July 2012, he issued the “The Kay Report – Review of UK Equity Markets and Long Term Decision”. The UK government’s commitment to act on his findings is detailed in the government’s response, “Ensuring Equity Markets Support Long-Term Growth”. In February 2012, the Davies Business Law Lecture was presented by The Honourable Leo E. Strine, Jr., Chancellor of the Delaware Court of Chancery. As the chief judge for the Court of Chancery in Delaware, Chancellor Strine is charged with overseeing the court which has served as the battleground for some of corporate America’s biggest legal fights. Confirmed as Chancellor on June 22, 2011, having previously served as Vice Chancellor since 1998, Chancellor Strine also has long-standing positions as the Austin Wakeman Scott Lecturer in Law at the Harvard Law School, Senior Fellow at the Harvard Program of Corporate Governance, and Adjunct Professor of Law at the University of Pennsylvania and Vanderbilt University Law Schools.

In October 2010, the Davies Business Law Lecture was presented by H. Rodgin Cohen, a partner and senior chairman at Sullivan & Cromwell LLP. In the midst of the financial crisis and its aftermath, Mr. Cohen has remained the pre-eminent advisor to numerous major financial firms. Mr. Cohen is a highly influential figure on Wall Street renowned for his practice in the areas of acquisition, corporate governance, and regulatory and securities law, as well as his expertise in non-traditional investments, and sales and restructuring arrangements in connection with the global credit crisis. Mr. Cohen addressed students, faculty, and local leaders in business and law on “the recent economic meltdown and the dawning financial era it has precipitated”. In March 2010, the Davies Business Law Lecture was presented by Professor Benjamin W. Heineman. As former General Counsel at GE, Mr. Heineman helped create the modern in-house legal department and redefined the role that lawyers play in business. He is currently a fellow at the Harvard Law School Program on the Legal Profession and at the Harvard Kennedy School, as well as Senior Counsel to WilmerHale. He is the author of High Performance with High Integrity. In 2008, Osgoode and Schulich were proud to host the Davies Business Law lecture with the Honourable William T. Allen, Nusbaum Professor of Law and Business, and Director of the Pollack Center for Law and Business at New York University School of Law. Mr. Allen addressed students, faculty, and local leaders in business and law on “Modern Corporate Governance and the Eroding Business Judgement Rule.”